We are a registered Scottish charity of healthcare professionals adopting a public-health approach to violence reduction because we believe prevention is better than cure.

The Public Health Approach to Violence

Let’s first start by thinking about what Public Health is 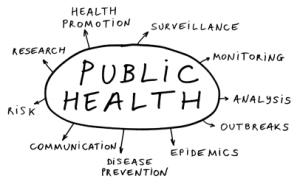 “The art and science of preventing disease, prolonging life and promoting health through the organised efforts of society”

So Public Health works to improve the health and wellbeing of a community and involves all the things you see in this image. It also takes into account all the various factors that might impact on health and wellbeing like clean water, good housing, poverty and many other things. Public Health involves a wide range of people from many different organisations and communities who all work together to improve the health of a community or society in general. Public health aims to provide the maximum benefit to the largest number of people in relation to the issue it is tackling

Public health is not an activity confined to one group or to healthcare alone.

The Public Health Approach is a way of looking at tacking a disease or other public health issue.

A great example of the first stage of the public health approach is the story of John Snow (not the one from Game of Thrones) and the Broad Street Water pump. John Snow lived in London at the time of a major outbreak of cholera in Soho the 1850s. At that time many people had no access to clean water or sanitation and the Broad Street water pump was where many of them got their drinking water. By carefully mapping where the cases of cholera were and by noting where those people got their drinking water he was able to conclude that the source of the infection was the Broad Street water pump. It turned out that the water was contaminated by sewage causing people became infected with cholera.

Snow’s investigation is a perfect example of the first stage of a public health approach which is to gather data on the problem and his actions led to improved sanitation and saved many lives.

Let’s think about this in relation to heart disease

Risk factors are things that make it more likely you will get a disease. Some of those are fixed and can’t be changed and some are modifiable and can be changed.

Examples of fixed risk factors for heart disease, one of the most common diseases in the Western world, are things like age, gender and race

Protective factors are things that help to prevent you getting a disease so again, for heart disease these are things like eating a healthy diet, not smoking, drinking within recommended limits and getting regular exercise.

The third step is to design and test out interventions or treatments to see what works best. If you were developing a vaccine or drug treatment this might involve a small scale trial to start with.

Vaccinations are probably one of the best known public health measures

Since we are in the middle of the COVID pandemic it’s useful to think about how vaccines are used to prevent disease. Vaccination aims to prevent infectious diseases caused by viruses

Vaccinations not only prevent or reduce the severity of the disease in the person receiving the vaccination, they also help to protect other people in society who might not be able to be vaccinated by reducing the spread of disease.

They can also help to eradicate a disease altogether if enough people are vaccinated -this is called herd immunity. Over the years vaccination has completely eradicated diseases such as small pox and made the occurrence of diseases like polio and tetanus very rare. Other diseases like measles are seen much less often than they used to be.

Vaccines are thought to prevent 3 million deaths a year worldwide.

The way vaccines work to make someone immune to a disease that is preventable is often applied to violence prevention.

Step 4: Scale up the successful interventions to reach as many people as possible

The last step, once you have something you think will work, is to scale it up to reach the maximum number of people so that as many as possible benefit from your new intervention. This is what is happening just now with the COVID-19 vaccination. It was tested in clinical trials and now as many people as possible are being vaccinated to try and reduce the incidence of the disease so that fewer people become seriously ill.

Here’s a summary of the Public Health Approach

Can you think of other common public health interventions?

Violence can be a lot of different things. We often think about it in relation to wars or gangs but there are many other forms of violence. Self harm and suicide are forms of self-directed violence. Interpersonal violence happens between individuals. It includes domestic, dating or intimate partner violence where one person exerts control over another, other forms of family violence like child maltreatment and also acquaintance or stranger violence; we’d normally include gang violence here. Collective violence involves violence on a much larger scale and includes wars, genocide and economic violence.

The one thing we do know about violence is that it is preventable.

How do we apply the public health approach to violence?

Taking a public health approach to violence involves treating it in the same way as a disease and applying the same public health principles to tacking it. This isn’t always straightforward as violence will change over time and is influenced by individual, relationship, community and societal factors.

There are lots of places you can find information about “who”, “what”, “when”, “where” and “how” violence happens. These include data collected by the police, hospitals, surveys and many other places. None of these will give a complete picture because a lot of violence is never reported. If you look at police data you will tend to see who is involved in perpetrating violence, what sort of violence happens and where and when it happens. If you look at hospital data you’ll see some of the same things but also who it happens to-the victims.

Once you have data you can start to spot trends that can suggest some risk factors for violence. This will depend on the sort of violence you are looking at. For interpersonal violence affecting young people those might include being male, carrying a weapon and living in areas of deprivation. Those don’t make violence inevitable they just make the risk of it occurring higher. You can also look for protective factors and those might include things like engaging with education and having a peer group who are not supportive of violence.

When developing interventions for violence you need to think about where on the spectrum of violence you are trying to have an effect.

You might be trying to prevent violence from happening in the first place-this is primary prevention-and that’s what we are trying to do with our MAV Schools programme, we talk to lots of young people even though we know most of you will never be involved in violence because it helps to provide you with the knowledge you need to make safe choices.

Once you have something that works you just need to work hard to reach as many people as possible.